Sulfur is one of the chemical elements of the periodic table whose symbol is S and its atomic number is 16. Sulfur is a non-fossil, non-volatile, multi-capacity, most known in the form of yellow crystals that are found in sulfide and sulfate minerals. Sulfur is a vital ingredient for all living organisms that is needed for amino acids and proteins. It is used primarily in fertilizers, but is used extensively in gunpowder, laxatives, matches and insecticides.

Notable Characteristics
The appearance of this navel is pale yellow, which is very light and soft. It has a specific odor when combined with hydrogen, which is similar to the smell of corrosive eggs. Sulfur burns with a blue flame, and it emits a strange odor. Sulfur is not soluble in water but dissolved in carbon disulfide. The usual oxidation states of this element are -2, +2, +4 and +6. Sulfur has many forms in all solid state and gas states, the relationship between them is not yet fully understood. The crystalline sulfur is shown as a sulfur ring S8.

Polymeric sulfur nitride has metallic properties, while it has no metallic atoms. It also has unusual optical and electrical properties. Non-crystalline sulfur or plastic is produced by the rapid cooling of sulfur crystals. Studies on X-rays show that an uncrystalline and chaotic species may have 8 atoms per star-like torso structure.

Sulfur can be obtained in two crystalline forms, Orthorhombic octahedral, or a crystalline cluster, the former being more stable at normal temperatures.

We are proud of the dear exporters of Sulfur.

applications
This element is produced for industrial use, such as sulfuric acid capture (H2SO4) for batteries, for the production of gunpowder and heating of rubber. Sulfur acts as an antifungal agent in the process of producing phosphate fertilizers. Sulfates are also used in washing and drying papers. Sulfur is also used to make matches and fireworks.
Ammonium thiosulfate or sodium is used as a stabilizing agent in photography. Magnesium sulfate can be used as an anti-dry and laxative agent, which is a plant magnesium supplement.

Compounds
Many of the unpleasant odors associated with living organisms are due to sulfur compounds such as hydrogen sulfide, which smells rotten eggs. If hydrogen sulfide is dissolved in water, acidic solution will be obtained that reacts with metals and forms metals sulfide. Natural sulfide, especially iron sulfide, is easily found. Iron Pyrites iron sulfide is also called stupid gold. This compound is remarkably conductive. Galena, a natural lead sulfide, was the first semi-conductor to be discovered.
Warnings
Be careful when working with carbon dioxide sulfide, hydrogen sulfide and sulfur dioxide. Sulfur dioxide, in addition to being completely toxic (more toxic than cyanide), reacts with the blue in the atmosphere and creates acid rain. If the concentration of this element is high, it immediately leads to death by stopping the tail and exhalation. Sulfur quickly ignores the sense of smell and thus the victims may not be aware of it. 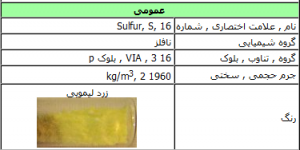 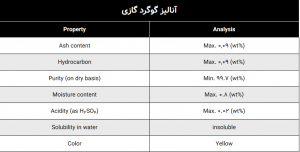 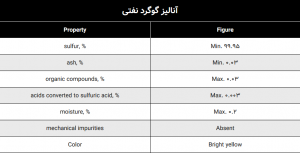 Related words:
Powder sulfur – Micronized sulfur – Bentonite sulfur – Mineral sulfur powder – Sulfur husk – Granular sulfur – Granular sulfur fertilizer – Bentonite sulfur fertilizer – Sulfur – Sulfur – Sulphur – Liquid sulfur
Types of sulfur
Mineral sulfur: Natural sulfur is more often found in sulfate and sulfide ions, which is easily absorbed by the plants. The purity of this type of sulfur is not very high and is about 15% to 40%.
Refinery sulfur: The most important source of this material is synthesized. Its purity reaches a maximum of 99.99%, and it is used to produce sulfur dehydration of condensates and natural gas. Sulfur producing refineries are both oil and gas and its production is in two ways:
Sulfur Husk: Due to the rapid cooling of the molten sulfur, it does not have any clear grains.
• Granular Sulfur: Produced by the Granulator and its aggregation is between 2 and 4 mm

Red sulfur
Red Sulfur is a powdery and micronized chemical substance that has the proper conditions for the coloring industry. Basically, red sulfur is a color of grain or pigment.
The price of red sulfur is suitable for coloring industries, and the purchase of red sulfur for export is of great importance. Exporters and consumers can make an advance payment for a purchase contract.
Sulfur powder, red powder, or sulfur red or sulfur red in neighboring countries, such as Iraq, has many uses, and its exports have grown significantly over the past years.

What is red sulfur?
Red sulfur is a chemical compound whose production technology is only available to Pars Chemistry and Kimia Industry. Red powder sulfur is therefore a valuable product because it has a special formulation and the high quality of this product has made it valuable in many industries and factories producing paint and paper and other industries of particular importance.
Sulfur is a strategic and practical product, and many industries use this material. As a result, this type of sulfur is considered as a strategic and strategic product. Therefore, the color industries and related industries are dependent on this product, and millions of these are annually The material is packed in Jamboboq packaging and exported from land and sea boundaries to countries such as Turkey, Iraq, Armenia, and Azerbaijan to be used as pigment or pigment.